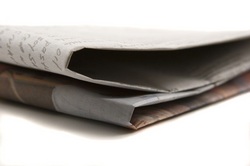 Here are my articles that have been published and works that I have done throughout my USF St. Petersburg career. Here on this page is my most recent article that I have published with the paper that I am currently writing with...the Seminole Beacon.

Seminole High Schools baseball team defeated the Tampa Jesuit Tigers, the undefeated number one team in the nation 2-1 on April 13th at Paul Straub Field at Hyer Family Park. After a homerun from catcher Michael Mann (9) the game remained tied for 10 innings before shortstop Alex McGathey (3) scored the winning run. RHP Nick Nolan (27) threw 97 pitches in 8 innings giving up only one unearned run. Seminoles next home game is the Pinellas County Athletic Conference Challenge on Thursday April 18 at 7 pm against the Northeast High School Vikings. 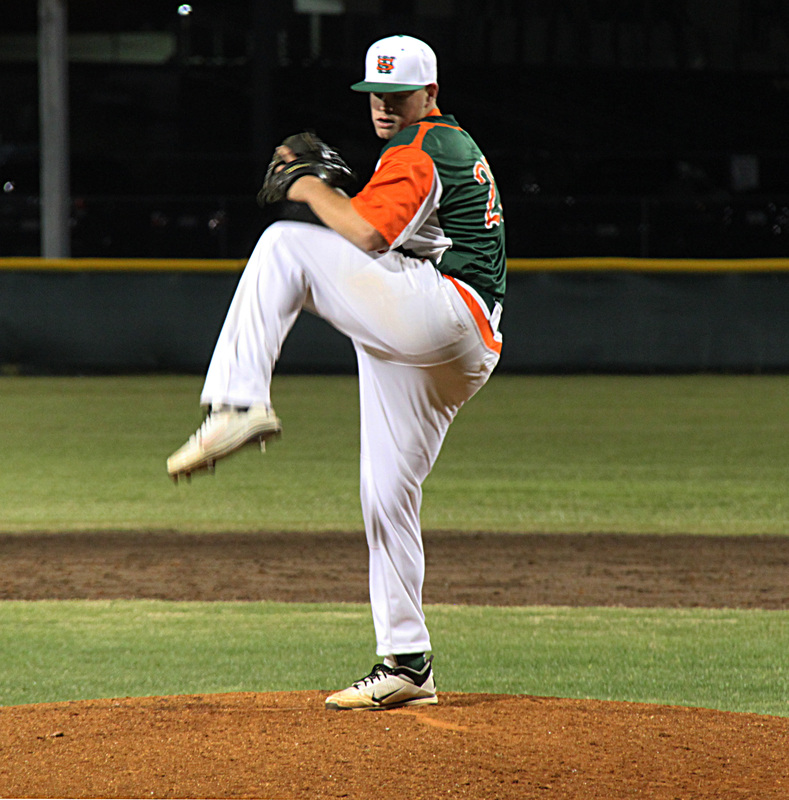 Seminole High School right hander Nick Nolan winds up for a pitch on March 12 en route to a no-hitter at home against the Pinellas Park Patriots. Nolan recorded eight strikeouts and allowed only one walk. For the season, he has five wins and a 1.91 earned run average with 15 strikeouts. 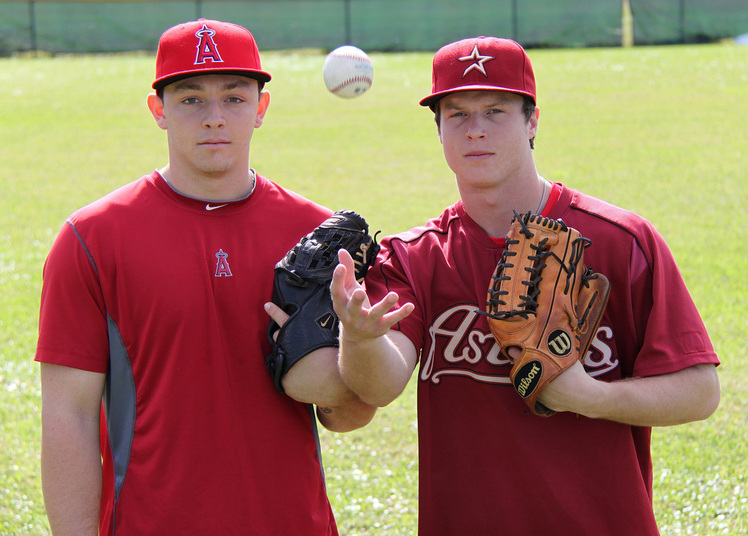 Former Seminole High School standouts Joey Krehbiel (Left) and Brett Phillips (Right) recently began spring training with their respective pro baseball minor league organizations. Krehbiel, a right handed pitcher, is training in Phoenix Ariz. with the Los Angles Angels organization after playing last summer with the Pioneer League's Orum Owlz in Orem, Utah. In 22 games, he was 2-2 with a 5.12 ERA and 34 strikeouts. Phillips, an outfielder, is currently training with the Astros organization in Kissimmee. Last summer, he hit .251 with six triples and 13 RBI's  playing for the Astro's Gulf Coast Rookie League Team. 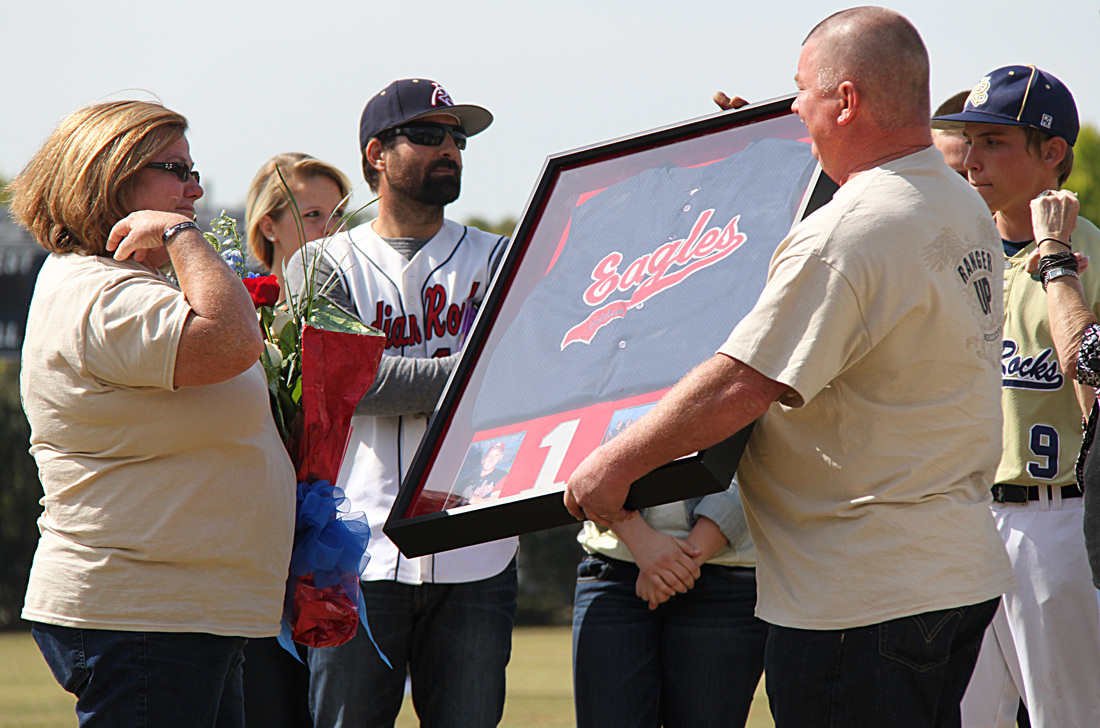 The Indian Rocks Christian School's baseball staff honored a pair of former baseball players March 10 who made the ultimate sacrifice by giving their lives as members of the U.S. military.

In pregame ceremonies, school officials honored former centerfielder number one Matt Sitton and catcher number seven Frankie Gross. Both graduated in 2004 and served in the US army.

Sitton joined IRC's baseball program in eighth grade and became a five-year starter and leadoff hitter. Gross joined the team as a freshman and was a four-year starting pitcher and catcher.

Both grew up together, played on same fall baseball leagues and became standouts in high school. They still hold many school’s baseball hitting and pitching records.

Sitton, a staff sergeant, was killed in 2012 during his third deployment in Afghanistan, after returning to Afghanistan on his 26th birthday.

Gross was a specialist who earned his bachelors and masters degree from Full Sail University in Orlando. He was only 21 days into his first deployment when he was also killed in Afghanistan.

For over a year, Indian Rocks Christian and their baseball boosters were trying to find a way to honor their fallen heroes. They soon found a way.

According to Moravick that is how they got the ball rolling.

“Both the Sitton and Gross family were very receptive to coming to the game and the pregame ceremony,” said Moravick.

In attendance for the Gross family was parents Frank and Toni, sister Natalie and Aunt Pam. The Sitton Family was in attendance with parents Steve and Cheryl and children Jessica, Cody and Jonny.

The families were escorted to the pitchers mound where flowers were presented to the mothers, Cheryl Sitton and Toni Gross. Framed photos along with their jerseys were given to each of the families as my memento to remember their legacy that they left. Lining the field was members of the freedom riders along with members of the U.S. Color guard.

Sitton and Gross’ former head coach DJ Springman remarked about how he got to know them on a mission trip to the Dominican Republic and the time he spent conditioning them into character players and adults they would become.

“Their death is a reminder of a fallen world that is all around us,” said Springman holding back the tears. “But more importantly with their parents here today with all of you represents a faithfulness in God.”

After the National Anthem the boy’s fathers, Frank Gross and Steve Sitton, threw out commemorative first pitches. According to Moravick, it wasn’t just an emotional day to play baseball, but a special day to honor these players and soldiers that gave the ultimate sacrifice.

“It was a very emotional ceremony for me and everyone involved,” said Moravick “It does make you appreciate the time you have with the players.  We spend alot of time together with summer ball, fall ball, in the weight room and of course spring season. The players are like family to me and the other coaches.”

The Golden Eagles faced off against the Seffner Christian Crusaders. They scored four runs each in the first and second inning and only allowed Seffner three hits throughout the entire game. Indian Rocks pulled out a successful shutout victory of 9-0.

Even though this is a victory, Moravick and the coaching staff will be making this season special for the team and the families, regardless of the final season outcome.

“We've dedicated the season to Matt and Frankie and we wear navy wristbands with their initials on them.  I think it’s important to remember the players and teams that played before us. I think it was important to honor Frankie and Matt for their service and sacrifice to this country.”

With this victory, the Golden Eagles now have a 9-5 record and are fourth place in the 3A District 9 standings. Their next home game is against West Boca Raton High School at 4pm. For more information about Indian Rocks Christian baseball, visit their website at www.eteamz.com/ircsbaseball/.

MORE PHOTOS FROM THE EVENT:
Proudly powered by Weebly